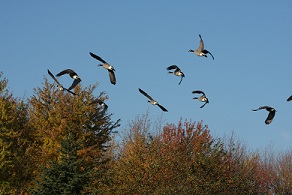 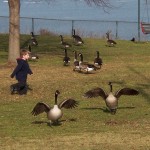 The Aggressive Nature of Canada Geese

Canada geese are very territorial in the Spring. When they are nesting or have goslings running about they become extremely aggressive if they think they are being threatened. Walk too close to their territory and they will charge. They do not stop until they feel there is no longer a threat. This should not be taken lightly, we have had reports of broken noses, broken ribs and even deaths caused by Canada geese attacks. One day you can be feeding the geese, and then find yourself being attacked walking to your car in the parking lot the next day. This behavior is showing up earlier this year with the warmer winter we have been having.

Also, it is important to note, that Canada geese are protected under the Migratory Bird Act. It is against the law to bring harm to any Canada goose, gosling or egg. Which is why it is important to understand the behaviors of the geese and implement a program to help control the population in urban environments as early as possible in the Spring.

How do you stop a goose attack?

Know a location in that is a hazard to the public due to the urban Canada geese population? Report it to Ohio Geese Control, and we will help resolve the issue proactively. 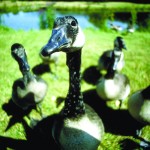